Mountains of coal tip waste could be put to good use via land reclamation from the sea, thereby protecting the vulnerable UK coastline.

The UK has two problems that could be solved via a constructive land use approach: One, Great Britain is a small island with a growing population, and Two, since about 1690, the detritus created by coal mining and coal burning has accumulated into veritable mountains of colliery waste which now spills onto rail lines, housing developments, and farming communities during heavy rainstorms. Not to mention that coal ash and fly ash chemical components can leach into local groundwater.

Although the UK’s coal tips may have been built with the best available technology and the best intentions decades ago, some of them are becoming unstable and need to be dealt with soon. Coal tip land is presently unavailable for farming or other any use until the waste is removed and the site cleaned, but that land could easily be turned into forest or crop land once remediated.

The solution seems rather obvious, doesn’t it?

We see how land has been reclaimed from the sea in the Netherlands for centuries now, and how in the UAE entire islands have been created from nothing more complicated than dumping enough sand into the Persian Gulf and compacting it until the new land has risen above sea level.

Here are some examples of land that has been reclaimed from the sea using basic materials and engineering.

This fascinating video has 15.5 million views on YouTube. Once you start watching, you can’t stop.

In the Netherlands, the entire coastline was changed using a different method where dikes were built some distance out to sea and the seawater was then pumped out, and soil and gravel was used to level the reclaimed land, thereby making it suitable for underground water pipes and sewer lines, and for roads and buildings.

And in Singapore, fully 25% of the country consists of land reclaimed from the sea, with plans to reclaim even more land by 2045.

It’s being done, every day, all over the world. Creating new land is common in the 21st century. Even Tokyo’s gigantic Haneda Airport was built on land reclaimed from Tokyo Bay. The trick… is to do it in a cost-effective manner.

Filling 55-gallon oil barrels or shipping containers with coal ash and other colliery waste and setting them into wet concrete slurry that hardens before the tide comes back in, is a cheap way of safely storing colliery waste for centuries.

What better use for soggy coal ash than to seal it in metal containers, and securely set the filled containers in plenty of concrete in order to help reclaim hundreds of square miles of land from the UK’s coastal areas, thereby protecting homes and businesses from dangerous storms blowing in from the sea, and consequently increasing the country’s resiliency from sea level rise brought on by global warming?

Tumbling such metal containers off the back of a truck onto coastal areas is a terrible idea, but if the lid is welded shut and each barrel is surrounded by 1-foot thick of concrete slurry — and once the concrete is cured — those containers won’t be going anywhere for the next 1000-years. 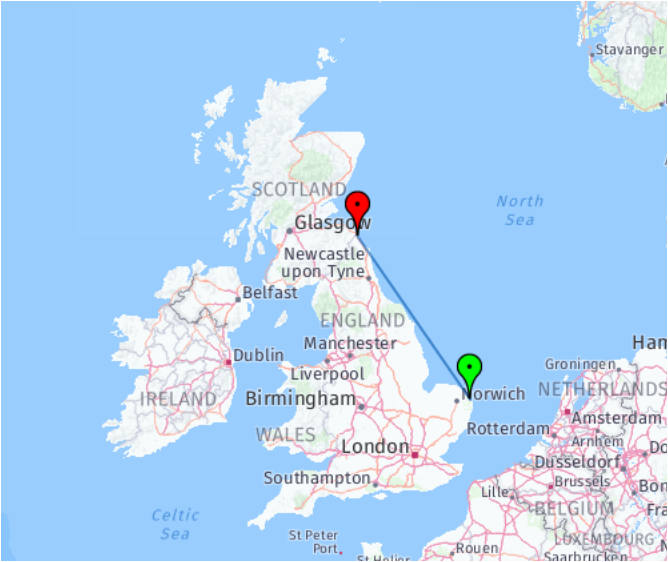 Reclaiming a one-mile-wide strip of land from the sea. Image courtesy of Dougal.co.uk

From Great Yarmouth in southeast England to Berwick-upon-Tweed in the northeast, the project would create thousands of jobs and 2020 could be year-1 of a 50-year project. Start with only 1-square-mile this year, and ramp-it-up annually!

Yes, I get it would be a massive and costly undertaking — but the simple fact is that Great Britain isn’t getting any bigger as its population continues to increase — even as the sea rises and massive storms erode more of the country’s land every year.

A 1-mile-wide strip of reclaimed land could be used for many purposes, including wind farms, agricultural land, containerized shipping ports, warehousing, industrial use, and a high speed rail link and motorway to speed people and goods to and from the north.

Wind turbines and tulip farms on land reclaimed from the sea in the Netherlands. Image courtesy of VVVNoordoostpolder.nl

Each 1-square-mile section would need to rise 40-feet above sea level, be sturdily constructed to weather the fiercest storms, and be covered with plenty of trees and fields to help prevent soil erosion over the decades.

On the Great Britain side of the reclaimed land (not the side facing the North Sea) it could be left to become an inland sea (a fisherman’s paradise!) or in some places local governments may decide to infill those areas to add even more land to their territories.

With a topping of gravel and soil to bring the reclaimed land up to an altitude of 40-feet above sea level, many square miles of land could be added to the UK’s vulnerable coastal areas, and that reclaimed land could be made into truly spectacular golf courses, sports fields, or other recreational uses.

Golfing by the Sea, anyone?

Just under 250-square miles of additional land would be added to the UK’s total land area and this 1-mile-wide strip of land would help to prevent erosion on existing land along England’s east coast, provide better storm defences, protect the country from eventual sea-level rise, and allow an expedited road and high speed rail route for people and goods travelling to the north of the country.

All that’s required to get this programme started is the political will to do it, so if you see merit in such a plan, please email your MP or local government and tell them you want a 1-mile-wide seawall between you and the open sea that would add beauty, recreation, an enhanced transportation corridor and industry to the region, and that colliery waste could be an important part of this great job creator.

Who knew that waste from coal mines and coal-fired power plants could play a part in solving the multiple problems of soil erosion, temporary coastal flooding/storm surges, and eventual (but permanent) sea level rise?