Truism: Whenever and wherever the unemployment rate is low anywhere in the world, drug abuse, crime, and homelessness drops.

Jobs prevent the depression that leads to drug abuse, crime, and eventually, homelessness.

Because corporations in North America prefer a high-ish unemployment rate (to guarantee they get the choicest and hungriest applicants, and to ensure a large pool of seasonal labour, and as a device that works to continuously dampen calls for a higher minimum wage) we have the follow-on problems of depression, leading to drug abuse in some cases, which eventually leads to crime and later, homelessness for many of the working poor.

Which results in higher costs to society and it’s the taxpayers who must cover those costs, one way or another

To solve this utterly predictable set of problems, all levels of government should be working with corporations to ensure that corporate needs are met — but without destroying the lives of many people who would frankly, rather be working!

Sweden has mandatory job sharing in those industries that can’t employ all of their workers. Except for retired people, students, those with chronic illness, or the very wealthy, everyone in the country works for *at least* 6 months of the year. Which neatly prevents such societal ills.

If you’ve ever visited Sweden, you’ll notice nobody lives in dumpsters there 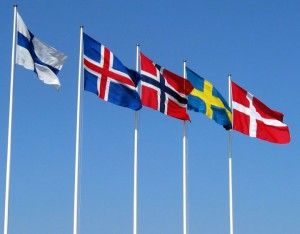 The ‘alternate person’ steps in and does ‘your job’ for 6 months while you’re on mandatory time off. Both people get Unemployment Insurance (UI) from Day 1 of their respective layoff dates.

It’s not like layoffs in North America. It’s more like, “Your scheduled time ‘off work’ is coming up, Anders. So, have you arranged the dates with your temporary replacement? You have? Thank you.”

In Sweden, you ‘own’ your job, you’re responsible for it, and you want to perform well for the company that has given you the responsibility for making sure that ‘your job’ is done properly

Also, even though you’re ‘off work’ for 6 months, you’re still expected to be available to fill that position whenever the alternate worker is ill, or can’t make it to work for any other reason. You like that a lot, because their UI system doesn’t penalize you for kindly making yourself available to the company AND you get to keep the wages you earned that day.

If you’re ‘on work’ for your 6 months and suddenly want a day ‘off work’ to go buy a house, propose to your partner or whatever, you just arrange it with your job sharing partner — and you’re covered. They come in and do your work for you. You inform the company merely out of courtesy that this will be happening. It’s ‘your job’ after all — not the company’s job.

So, let’s say that you’re off work for 6 months and ‘Sven’ (the person doing your job) has a skiing accident and needs 10 days off work to recover, you not only get your regular UI payment, you also get the normal wages for each day that you replaced Sven.

In this hypothetical job sharing scenario, the job of ‘Anders’ and ‘Sven’ is totally covered no matter what, 365 days of the year

Overtime wages? Unknown in Sweden. With one phone call the company simply adds another already trained worker to the project, and can keep them employed any number of days, or until project completion. Then, they send them back home until the company calls again to help with another project.

Everyone has a job, or is on UI for part of the year. Consequently, depression, drug abuse, crime, and homelessness are almost unknown in Sweden

The takeaway point is; If you live in Sweden — you’re a worker, you’re a valued person, you’re part of Sweden’s ongoing success, you belong.

When everyone matters — corporations work better, society works better, and the UN scores your country highly on the UN Happiness Index

Corporations like this employment policy, because more employees than they can afford to keep employed year ’round ‘own’ their particular position and over the course of a year, both workers communicate often, to make certain that every single working day of the year is ‘covered’ for the company.

The company doesn’t care which of the two workers are onsite on any given day, because both are eminently qualified and both feel that they ‘own the job’ and are responsible for it. Which is much better for the corporation when compared to only one person owning that job.

What happens in a Swedish company when an employee has time off due to illness, mandatory maternity leave, vacation times, or car trouble?

Nothing. The alternate worker is likely already on the premises doing the job. Utter, boring, Swedish efficiency! Also known as the Nordic Model — a fascinating mix of social and economic policies which has shown steady, predictable results, going on four decades.

The company knows that every work day of the year, each position in the company will be filled by the regular worker or the alternate worker — no matter what!

The inequality in North America is stunning. And there’s no good excuse for it. It’s merely a lack of leadership. Governments are kowtowing to uninspired, faceless, and unaccountable corporations that only care about the bottom line.

But hey, don’t blame the corporations! They’re in business to make a buck — not to solve social problems — that’s the government’s job.

But when the corporations are the ones causing the social problems via their policy of keeping workers hungry for work through a policy of high unemployment, union-busting, threats to export jobs to Asia, downsizing threats and more — that’s when we need to look at a better model.

And in the case of Sweden and the other Nordic countries, a much better model already exists — not just for society, but one that works better for corporations as well.